Bas-Lag is the world in which Perdido Street Station, The Scar, Iron Council, and the short story "Jack" in Looking For Jake are set.

Bas-Lag consists of several continents and large oceans that extend thousands of miles to the south, east, and west of the Rohagi continent. Much of the world is uncharted, and it may actually be infinite in size. Native predatory wildlife is generally extremely dangerous, and the danger is only compounded by a variety of natural and unnatural hazards.

Bas-Lag is located on one plane of existence, out of several. Other planes include the plane of Hell, a brine-dimension inhabited by gargantuan sea-life, such as the Avanc, a plane inhabited by large, extradimensional spiders with overdeveloped senses of aesthetics called Weavers, and the multiple planes inhabited by certain kinds of wildlife, such as Slake Moths.

The geography of Bas Lag is unclear, owing in large part to the numerous hazards on both land and water. Passages from Ghosthead literature, such as The Verses of the Day and the Imperial Canon, as well as comments made by Uther Doul, indicate that Bas Lag may be an "infinite plateau", in contrast to the spherical planets and stars that populate its night sky.

While Bas-Lag may well extend indefinitely in all directions, currently only four continents are known for certain to exist: 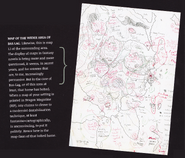 A fan map of Rohagi, based off of the official map.

Community content is available under CC-BY-SA unless otherwise noted.
Advertisement